I guess this’ll serve as a test for posting (so far so good).

Something interesting occurred to me over break while hanging out with my brother at his house. Being four years older than me and out of college, he’s got what many would assume to be “the life”: living in a house on campus with four of his best friends, working as a bike mechanic/caterer, and generally just hanging out (as far as I can tell). This afternoon, which he happened to have off of work, we were working on a monstrous 2,000 piece puzzle of Van Gogh’s “Starry Night” because that’s what you do on Thanksgiving break. For the record, all of the pieces looked the same and I was proud when I found a spot for one of the pieces. No more were found.

Puzzles aside, the interesting thing I noticed had to do with the cold that my brother was fighting at the time. Throughout the time I spend there, rather than using tissues to blow his nose he used a handkerchief. I’ve never pegged my brother as being a huge eco-geek, so at first this got me thinking. Then I realized that maybe he wasn’t using tissues because he really wanted to go without any waste, which I knew wasn’t the case based on looking in his kitchen trash can. He just didn’t use tissues because he doesn’t have a lot of money to spend on extra things, which when you think about it, tissues totally are.

Here’s how I thought about it: the only reason that tissues were invented was because at some point people started thinking that it was kind of gross to carry around a handkerchief for blowing your nose. There simply aren’t any other  reasons. They’re not more comfortable, not more effective at catching your snot (probably less so, actually), and not any more convenient. So once people decided that they wanted to start selling these convenient little sheets of tree pulp, people just assumed that we should start blowing our nose with them, and before you could say “capitalism at its finest” it became the societal norm and expectation that we throw away our nasal mucous. So yeah, I guess that it’s kind of weird to think about carrying around your snot, but if you just fold the handkerchief (duh) and put it in your pocket, it takes approximately 20 seconds to get the hell over it.

After thinking about this for a little bit, I started to get a little more excited for NI week (at least this part of it). I pulled out a good soft bandana, got it all prepped for its newfound usage, and wondered how long before I’d have to wash it. 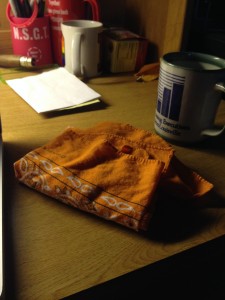 I wish I was a little bit taller.