As you know this did not start off the way I planned. I already spent an hour on the phone this morning, during which I made my first waste mistake. Without even thinking about it, I automatically grabbed a square of toilet paper to blow my nose while I was on the phone with the IRS. Nooooooo!

Ugh. I was already concerned about meeting my trash goal, and now I’ve got one more thing to add. Habits are so hard to change…especially when we don’t even think about them. Also, I went to get coffee and forgot to bring my utensils, so again, I ended up using something that will eventually end up in the waste – and I hadn’t even been up for 2 hours. However, I’m hoping to really learn from these mistakes and really focus on the waste goal the rest of the week. Because, I think the food goal is even tougher.

Food is always hard -because you want to eat in a way that doesn’t require a lot of energy or water. This typically means local and no meat. But local during this time of year looks like this (see below)- which looks like awesome, healthy, fresh food- but try figuring out a meal with this. I was starving by the time I got home to make lunch (this was after I walked to the post office and then to the park to pick weeds for another meal- more on this later), and I had no idea what to do with all of this. So, I grabbed the local bread I bought over the weekend and found some local cheese in the fridge and made a grilled cheese. Once I sustained myself with that, I finally used a bunch of the greens, a carrot and some homemade croutons (from local bread!) to make a salad. Not gonna lie, I love salad and I do NOT love this one. I have no idea what greens I put in it. I hope I can find a way to improve my meals- because today feels like asceticism. 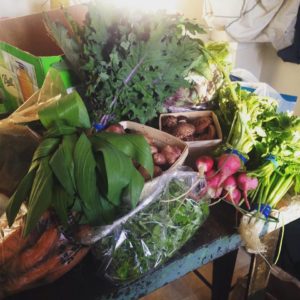 Other than that my energy goal is good. I’ve only been on the computer at home for about 20 minutes. So, I’m off!