Ugh. I started writing this last night because the day’s events took me by complete surprise. So much so that I thought my first day of NI week was going to be ruined (I’ll write all about it soon). And then I started thinking, “How can someone be prepared for an unexpected event when they are trying to live a NI life?”. How did Colin adjust for the totally unexpected…. maybe nothing unexpected happened to him during his whole year (or at least unexpected to the point that it would totally affect his experience)? He told us about the birthday parties and the trouble with food and with transportation, but he didn’t tell us about finding a lost dog! I also accidentally locked my partner out of the house, but that became the least of my worries by about 4pm.

The story: So, I planned to take care of some errands today (Sunday) so that I wouldn’t have to drive at all this week (which is already kind of cheating- but that is what happens when there is no public transportation where you live and you don’t have all the stores you need in town). So, even though my plans were screwed up by my locking my partner out (because I had to drop what I was doing to get home), I was back on track with all of the things I needed to do by 3pm, which gave me time for a jog, shower, finishing my errands, making dinner, etc. Then just 10 minutes before I made it home from my jog, I came across a dog that was about to run into the street. I was facing the dog from across the street, so I looked both ways quickly and sprinted to him before he made it to the street. But then I was stuck with him. There was no owner in sight and no identification on his tags.

Long story short, I walked him around for another hour and still couldn’t find his owners. So, he had to come home with me so that I could finish my errands. By that time my phone was dead (I had been posting all over facebook, calling police, etc.). And as I was running errands, I continued to check my phone every few minutes to see if anyone had found his owners. I was also thinking about all the resources that we put into our own dog, the food, the beds, blankets, toys, treats, etc. Then I started thinking about how I was going to have to drive him to get his chip checked in the morning and about how I was going to have to print paper to show I found a lost dog. And, all of this felt really unsustainable. I was thinking that my first attempt at NI this week might already be ruined- I’d have to be on FB more than I wanted, I’d have to charge my phone/computer more than I wanted, I’d have to drive, I’d have to print paper. I also thought about how much more time all of this was going to take me. NI already takes up a lot of time. How was I going to do what I needed while looking for Mr. Monk’s parents?

And that is his real name, because I finally found his parents at 7:15 last night, and they let me know. Ironically, he lived on our old street! I got him to his home by 7:30, but I was exhausted after that. I didn’t get to really prep anything for NI week like I wanted, so even though Mr. Monk is home and a major crisis was averted, I still feel like today might be a little shaky. 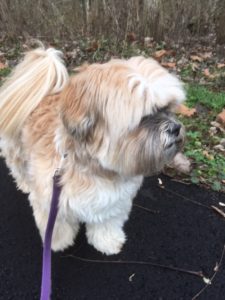 Good luck everyone….and feel free to comment here as one of your two comments. Also here is a pic of Mr. Monk.