Although Rome was a sprawling and bustling city of a million people, little of it remains today. Most of the remains, like the Forum and the Colosseum, tell a tale of the elite—emperors, senators, generals—which was only a small percentage of the population. Not much remains to tell us about the normal people, like how they lived. However, a small city on the outskirts of Rome, now called Ostia Antica (os referring to “mouth,” since Ostia was by the Tiber and served as a port for Rime), is well preserved and has filled in the gaps about how the Romans lived. 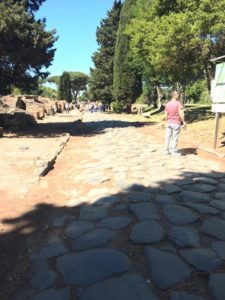 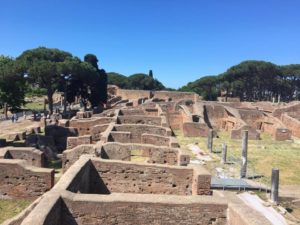 After a rather long bus ride, we took the metro and arrived in Ostia. The busy city of modern Rome was replaced by the country side, with trees providing shady relief from the blazing sun and birds chirping away. We walked the Roman road, sprinkled with red poppies, now withered and rendered uneven, towards the ruins of the city. The ruins are so intact that we could see how the city had been laid out, with insulae (apartment buildings), shops, baths, public toilets, temples, and a theatre.

We saw many shops, as indicated by their particular threshold, where a Roman could buy a quick snack. Public baths were identified by the mosaic floors, usually depicting sea creatures. These baths were abundant and entrance would have cost very little or free, since the Romans did not have water in their homes, save for the wealthy who might have pipes connected to the aqueducts. These baths were places of hygiene and socialization. Wells were on the side of the road, and we sympathized with the Romans that occupied the top floors of the insulae, as it would have been difficult to carry water up. Additionally, the top floors were cesspits and fire traps, so the more prestigious apartments were on the lower levels. Another cesspit was the public bathroom, in which people conducted business in rows of holes. This too was kind of a place of socialization. 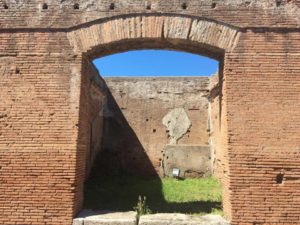 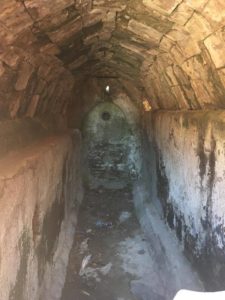 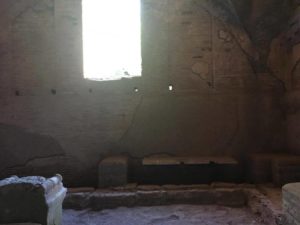 One very interesting place was the ruins of a fire brigade. Fires were very dangerous in ancient Rome, often devastating cities by burning apartment buildings and public buildings such as temples. Before Augustus established an official fire brigade, fires would be put out by the locals, and not very successfully. Indeed, fires occurred so frequently that Crassus, who had his own private fire brigade, became the richest Roman from profiting off fires, often coercing people to sell him their property in order for his brigade to put out the fire. At the site a monument to Augustus stood among graveyards, showing thanks to Augustus for funding the brigade as a gift of his benevolence to his subjects. 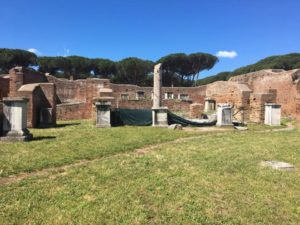 Headquarters of a fire brigade, lined with graves and a monument to Augustus

The theater in Ostia is a stone structure facing an open courtyard. There are entrances on both sides near the open pit where the stage would have been, as well as on the back sides. While the upper sections of the seating are simply travertine slabs serving as benches, the bottom area nearest the stage is a flat marble platform where the wealthy of Ostia would have been able to purchase seats to view the performance from. In antiquity, behind the stage there was a large stone wall serving as a backdrop, however in modern times only the furthermost left and right portions of the wall are still standing. Behind this wall was a large courtyard lined with vendor booths. While not very much of the original brick enclosure remains, we are able to tell what the shops held due to the mosaic signage inlaid in the ground in front of the shops. 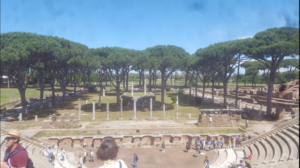 From here we wandered through the city, observing the remains of restaurants and bars, as well as what served as an industrial bread factory with a massive stone oven. The common people of Ostia did not usually have places to make food in the capacity we do in modern times, so they often went to food places around the city. We observed one such place, a bar carved from marble slabs that is still in great condition today, albeit showing the wear of centuries past. 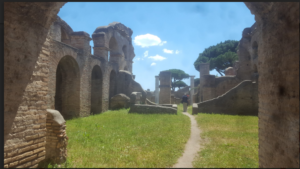 After viewing some of the ancient places to get food, we took a break for our own lunch at the cafeteria style restaurant around the corner from the museum. After eating our food, we observed a collection of large stone jars, called dolii, around six feet tall by three feet wide, that would have been buried so only the opening was showing, serving as temperature-controlled storage containers for food and drink. Next to this collection of storage containers was the “marble graveyard”, which housed different types of marbles recovered when Ostia was excavated. Particularly interesting was a set of four marble pillars, that were unfinished and still remained part of one large marble block – a common method of shipping columns to avoid damaging them in transit. These columns would have been finished and polished when they arrived at their destination.

Lastly we observed an underground chamber housing a statue in tribute to the god Mithras, one of seventeen such chambers discovered so far in the ancient city. Lastly we observed the Bath of the Seven Sages, one of many similar public bathing areas around the city. These public baths would have been finished in ornate marble, often with an intricate mosaic floor, and were a popular spot all over the city. There were both cold and warm baths, however the warm had to be constantly heated by underground fires, which meant that in the hidden tunnels surrounding the baths, slaves would have labored out of sight to feed the fire to warm the water. After this we were finished for the day, and half our group returned to the Centro, half took a train to the coast and spent the afternoon on the beach. 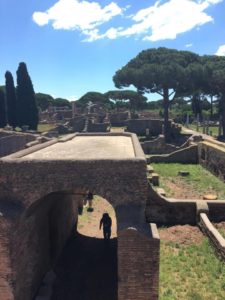 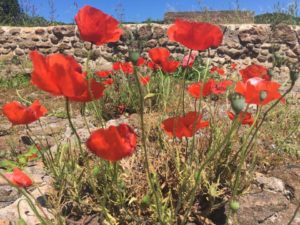