Our day began with a lengthy metro ride from Castellammare di Stabia to Herculaneum. We were able to view about a quarter of the town, well preserved by the ashes and pyroclastic substance of Mount Vesuvius since 79 AD. Making our way through the town gave us a pretty vivid idea of what life was like for the Romans from their architectural styles to their artistic preferences and even daily activities. We walked through houses, sales shops, taverns, public baths, a brothel, a bakery, and a temple experiencing the setup of Roman life. The town was filled with history, but empty with people. On the way out of the city, we were able to see the Roman’s escape plan up close. Barracks of well-preserved skeletons lined the original sea shore. We witnessed the final resting places of many of the residents of Herculaneum trying to escape the eruption. These barracks remain opened to the public and the bones were purposefully left on display in the original positions they were found. 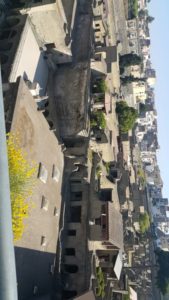 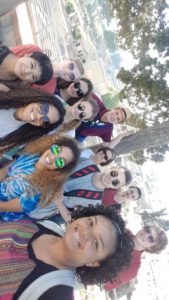 Following our exploration of Herculaneum, we jumped back aboard a bus that took us to our next destination, the Villa Poppaea. The past few days have put a heavy emphasis on understanding the domestic and daily life of the Romans with this villa continuing the trend. Even upon walking down the stairs to the villa, one cannot help but notice the massive difference in elevation that signifies the change in ground level between antiquity and now as a result of the pyroclastic flow. The effects of the eruption could be seen in color changes of the wall art as it gradually slides from red to yellow as you gaze at them from top to bottom. One of the rooms that particularly stood out displayed two peacocks surrounded by colonnades. After some discussion, we came to the conclusion that these peacocks were likely drawn by different artists as can be seen through the varying details and quality. This highlighted how the beautiful works on display in these households were not always by a single person and showcased various skill levels. Other notable points of interest were the small animals that lined the walls of the peristyle, the detail on the interior sides of the columns versus the exterior sides, and the intricate art on the walls of the gardens or nymphaea that reflected what would have been the contents of the room. When discussing ancient Rome, typically the large scale monuments and works are the center of focus. Having the opportunity to witness a quieter, simple side of life in their culture is eye-opening and offers a new perspective. 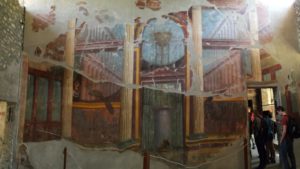 After the completion of our daily tours, we were able to explore our surroundings. Some students decided to climb Mount Vesuvius to get a better idea of the impact of the eruption in 79 AD. The other group of students returned to Castellammare to explore the town, recharge, and begin homework. We boarded the train once again for the final journey back to the Vesuvian Institute and had a short reunion with a furry friend that we met when we departed in the morning. The dog decided to follow us down the streets and barked at multiple cars as we went to get some much deserved gelato. Naples offers a much different lifestyle and build than what we were accustomed to in Rome, but it is a nice change of pace that gives us a taste of both worlds just like the villas.