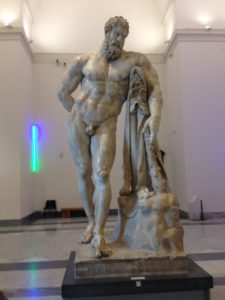 by Geneva and Nick

Today we went to the National Archaeological Museum of Naples! There we saw a lovely mix of frescos, mosaics, busts, and full body sculptures. One amazing sculpture that we saw was a marble figure of Hercules. In this sculpture he is carved as the ultimate male figure, his entire body is bulging with muscle from his neck to the tops of his feet. Something notable about these sorts of figures from antiquity is that the bodies are completely unattainable. And we’re not talking about unattainable in the same way that you see Instagram models with “perfect” butts, it has actually been proven that if a man were to exist with these proportions, he would be unable to walk.

In this picture (below), we see quite a slew of different animals. As you can see, we have an artist’s interpretation of a bunch of these animals. Right in the middle, you can see what is supposed to be a hippo, except it has some very sharp teeth. Clearly, the artist who made this mosaic has probably never seen a hippo, but believes to be a flat-snouted animal with sharp-razored teeth! We also have an alligator with a snake chilling in the water with a bunch of ducks and other birds, what a wonderful piece! 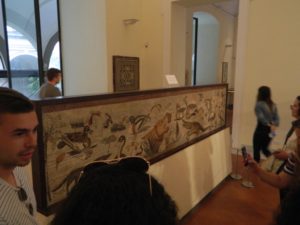 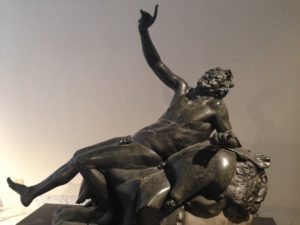 A figure that I (Geneva) really liked was the drunken satyr. This statue was cool in how realistic the satyr’s expressions were. He really did look like he was just hanging out in a bar having a good time, maybe laughing at something his friend had said, maybe singing a pub song. His expression was perfect, mouth slightly open with his hand up in the air and having the time of his life.

After our morning at the museum we had an afternoon free, we used this afternoon to try Naples famous pizza. Yum! 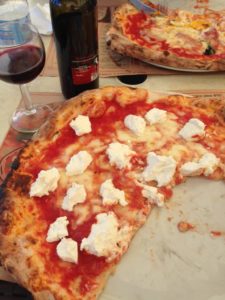