We began our tenth day with a nice breakfast, consisting mostly of giant croissants. While walking down to the bus station from the Vesuvian Institute we saw many locals beginning their day too. One person in particular stood out – he was wearing a bright yellow blazer and decided to aggressively serenade us. 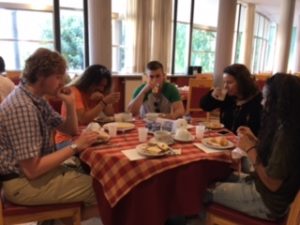 After a short train ride, we were at Pompeii! Pompeii was very different from the sites we saw in Rome as we were able to see and navigate a Roman city, given that there is no modern city on top of it. Pompeii had a diverse past with Greek, Etruscan, and Italic influences before becoming a Roman city. The earliest traces of civilization date back to the 7th-6th centuries BC. Pompeii became a Roman colony after being its ally for many years in 80 BC. Unfortunately, (or fortunately for archaeologists) Pompeii was covered in about 15-20 feet of volcanic ash in 79 AD when Mount Vesuvius erupted, which killed the residents almost instantly by suffocation. However, the thick layers of ash preserved the city almost entirely intact for centuries as most of the city was hidden under ash before it was first excavated in 1748 under the King of Naples, Charles III of Bourbon.

We began our day in Pompeii with an exercise to navigate the city and identify various features of it, such as the public baths, the forum, shops, and temples. We were on our own today without the help of Dr. Goldman or Dr. Kennedy to travel through the large site. The first place we stumbled upon while entering the city was the public baths. One of the most impressive parts of the baths, was the cold pool, the frigidarium. It is circular in shape with with two circular in-set alcoves and was decoratively painted. 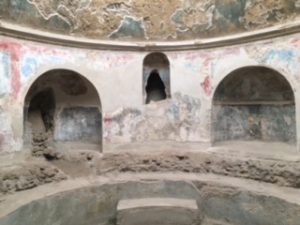 Then, we made our way to the forum, which is one common feature of all Roman cities. However, not much of the forum in Pompeii survives unfortunately as it was looted by the later Romans, who saw some of the tall columns of the forum poking through the ash layers. Evidence of this is the lack of flooring, columns, and the many missing statues. The statues were most likely looted by the Romans after the eruption to be either re-carved if they were made of marble or melted down in they were made of bronze. However, they left the statue bases in the forum, which demonstrates how many statues would have once lined the sides of the forum. 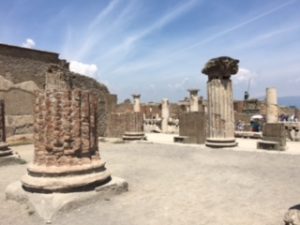 Shops were another common feature of Roman cities. As a group, we were able to identify the shops right away because of the elevated entrance ways with deep grooves, which were used to open and close the shop doors. We saw some shops that looked like taverns or bakeries, as well as some high-end shops that were attached to the homes of wealthy merchant Romans. Pompeii’s elite was mostly made up of upper-class merchant families. 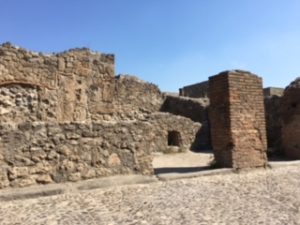 And lastly, we found the temples, which are another major feature of Roman cities. Although we saw several temples during our long, hard and hot journey through Pompeii, the Temple of Jupiter was the most interesting. As our lovely tour guide, the one and only Paolo mentioned, little to no statues were found during the excavation of Pompeii, as the Romans took most of them after the eruption during their excavation of Pompeii. However, the Temple of Jupiter was particularly interesting in the sense that it displays the head of a statue of Jupiter found during post-Roman excavations. We also saw a foreign temple – the temple of the Egyptian goddess Isis, which demonstrates the diversity of ethnicities in Pompeii. 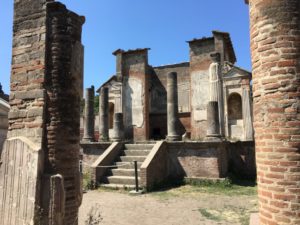 We made our way through much of Pompeii and saw much more than we could ever write about. (Pompeii is about 170 acres of city!) However, traveling through Pompeii helped us learn a lot about the composition of a Roman city, how to navigate it, and allowed us to experience (in a way) what a daily Roman’s life might be like.