We started the day in Nauplion, which is an incredibly beautiful town. It was so beautiful due to the town being located right next to the sea. We all had breakfast in the hotel, and I personally had eggs and an orange. The oranges from Greece are a lot better than the oranges in America, so I have been trying to drink as much orange juice as I can. We were only in the area for the night, and we did a lot of sightseeing the previous night, so we got right on the bus after breakfast.

We then rode the bus to Corinth, and we saw an ancient site there. Corinth was a very different town from the others because a lot of different influences impacted them throughout history due to the fact that it was occupied by both the Greeks and the Romans.  At the site, we were able to see the temple of Apollo. This temple was surprisingly large. It had a very nice location because it was between the sea and the giant mountain. Also, at the site the site dog followed us around for a little bit. There has been a lot of site dogs on all of the sites that we have been seeing throughout the trip.

Another interesting thing that we were able to see in Corinth was Pirene fountain. This was really cool because if you stood on a certain rock, you were able to hear the water running. It is actually uncertain when it was actually founded due to the fact that it is based on the myth. The myth is actually really interesting, as Pirene was a nymph. Her son was killed by Artemis, and she was so sad that she turned into tears. She then became the fountain.

At the museum, we were fortunate enough to have an American Fellow give us a private talk. We learned about the medical system in Ancient Greek, which is very interesting. They would go to the god of Medicine, Asclepius. After the Ancient Greeks were healed, they would put clay statues in the temple as a thank you to the god. We were able to look at the clay statues of the body parts and we were actually able to hold them. When we were learning about how Asclepius healed them, I was wondering if the Ancient Greeks just believed they were healed or if they actually became healed. 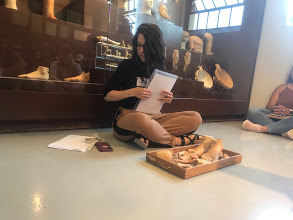 The fellow that gave us a talk on the medical system and the donations for Asclepius.

At the museum, there was a exhibit that was titled “The Famous Kouroi of Klenia”. This was my favorite exhibit that was in a actual museum. This exhibit was interesting as we were not able to take any pictures. It was open to the public, but they did not allow any photos and I saw the security yell at a women because she had her phone out. This exhibit had two statues of Kouroi that were in great condition. The exhibit also had 2 graves that actually showed skeletons. There is actually a interesting story behind the statues because it was actually recently found in the black market. The fact that these beautiful statues were being sold on the black market makes me wonder how many beautiful artifacts are currently being hidden in the black market.

We were able to get lunch in Corinth, and we went to an adorable restaurant that looked onto the ancient site. It was possibly the nicest location that we have had food because of the view. At the restaurant, I got a gyro and orange juice. The orange juice was incredible, as it was completely fresh. Since I have been to Greece, I have been drinking a lot of orange juice, but this was definitely the best orange juice that I have had. After lunch, we left for Athens which was about a hour bus ride.

When we got back to Athens, we all went back to our hotel rooms for a little while to rest. I left with Kelsey, Kenzie, Hannah, Ryan, and Mireya to go to Coffee Island. All of us got our usual drink, which is the Coffechino. We have been getting them every day when we are in Athens, and it is the best coffee drink that I have personally ever had. After we got the Coffechino, we walked around and looked at the shops. I found a shop that had musical instruments, and it was really interesting. They were all small and the store owner told me that they are Greek instruments are traditional to Greek culture.

For dinner, we went to το καφενείο for a farewell dinner. The food was considered to be very authentic. Keti, our tour guide, also mentioned it is a family restaurant.  It was actually interesting because we did not have our own meal, rather we got a lot of food that we shared with the table. There was a lot of different food and I was not able to catch all of the names. I noticed that most of the dishes that we were served contained a lot of cheese.

After dinner, a bunch of the students went to the rooftop of the Jason Inn. We were able to all hang out together which was very nice as it is our last night in Greece. I am going to miss Greece very much because it is such a beautiful country and the people were amazing! 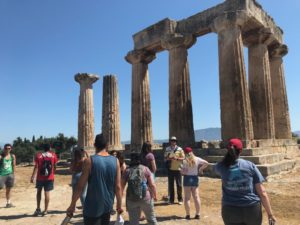 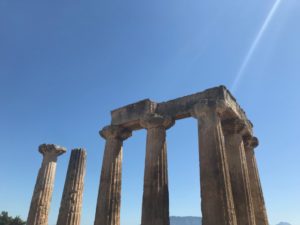 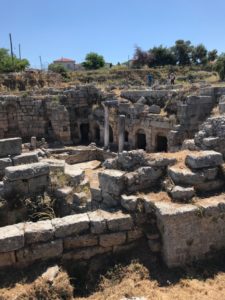 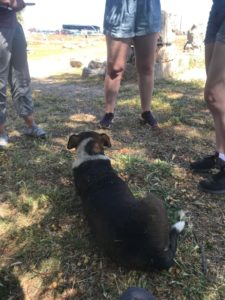 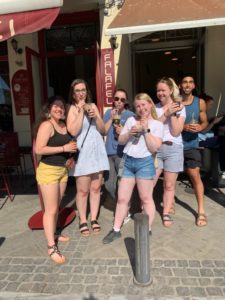 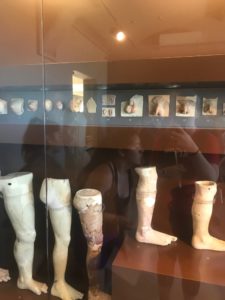 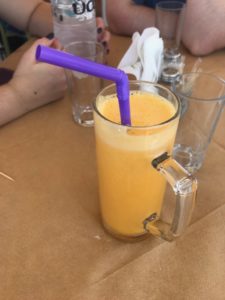 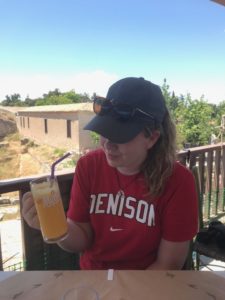