We started the day early with breakfast at the Neda hotel in Olympia. The balcony’s in the dining area had a great view of the town.

In the Iliad and the Odyssey, Homer describes ancient civilization and cultures that preceded that of the Hellenistic period. In the 18th century, people began to wonder if the stories of Homer’s epics were based on real history and they set out to find the remains of the civilizations mentioned by homer. Heinrich Schlimann was among these men that searched for these locations and found the remains of many sites that were believed to be the ones referenced by Homer. Among these was castle in Pylos. Many believed that this could have been the palace of Nestor that is described in the Odyssey.
Due to the second world war and the Greek civil war, excavation did not fully begin until a few decades later.
Today we visited the site that is hypothesized to be Nestor’s palace. We had the privilege of meeting with Dr. Sharon Stocker ’81, a Denison alumna who is currently the director of the site. Dr. Stocker gave us a guided tour of the palace and the near by tholos tomb. We had the amazing opportunity to to visit the active excavation site that Dr. Stocker is leading.

After visiting the site we got back on the bus and headed to Myceane. We stopped for a quick lunch at a roadside plaza. At this point having been to several of these stops, I have come to the conclusion that truck stops in America need to step up their game.

Next we arrived in Mycenae and visited the citadel that many have attributed to be the palace of King Agamemnon. This palace is placed high on a hill that over looks the surrounding countryside. The great Lions gate of Mycenae sits at the entrance of the citadel walls. As the name implies, the lentil of this gateway features two female lions partially standing on a platform that has a column. At one point there may have been a figure of a goddess, maybe Hera, atop this column but we cannot know for sure. The heads of the lionesses are missing but we can assume they would have been turned to look at any one approaching this entry way. The size and grandor of this gate exemplifies just how powerful and impressive this civilization was and would have served not only in guarding the citadel but also reassuring or intimidating any visitors that passes through the gate.

Inside of the walls there is a large grave circle that has been found and predates the construction of the walls. Based on the artifacts found in this grave site and the fact that it was undisturbed by and incorporated into the walls of the citadel, people have hypothesized that these were very important and sacred grave sites.

Within the walls there are remains of the fortress that once stood on this site. At the very top of the mountain is what’s left of the palace. We hiked up to the top to look at the site and take in the breathing view of the surrounding area. After taking in all the views of the site we walked through the museum and spent some time looking at the artifacts that were found on the site and sketching in our journals.

The last stop we made at this archeological site was to visit the Tomb or Treasury of Atrius. This tomb is also a tholos tomb, like the others just outside the Mycenaean walls and the tomb open to the public in Pylos at the palace of Nestor, though much larger. Because of it’s size and construction, much of the tomb has remained intact. We were able to walk into the tomb, though we didn’t stay long due to the not so great smell.

We got back on the bus one last time and drove to the nearby town of Nafplion. We dropped our bags off at our hotel and got ready to got to the award winning Karonis distillery to do a ouzo tasting. Before heading to the distillery, many of us stopped to get some gelato, because you can’t drink ouzo on an empty stomach! We walked through the town to the Karonis distillery where the owner explained the process of making ouzo and the other liquors produced by the distillery. Those that wanted could try the different varieties of liquor that were distilled here.

After our tasting we we’re free to spend the evening in this beautiful seaside town that was once the catpitol of Greece. Some of us chose to go to dinner right away and some elected to stroll the picturesque streets and peruse the many small shops. 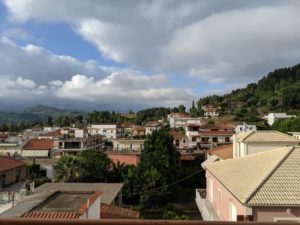 View from the hotel at breakfast 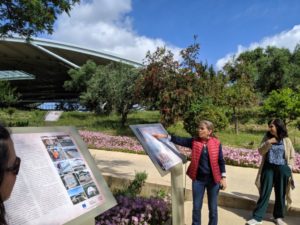 Dr. Sharon Stocker giving a guided tour of the Palace of Nestor 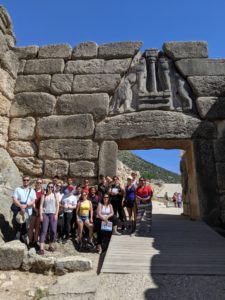 The whole class at the Lions Gate 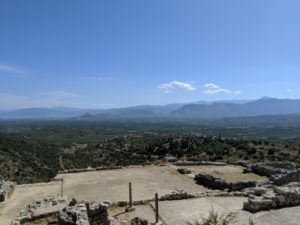 View from the top of the site in Mycenae 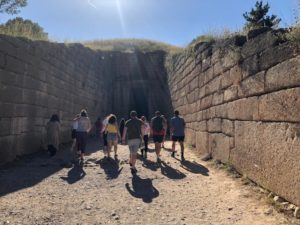 Entrance to the Tomb of Atrius 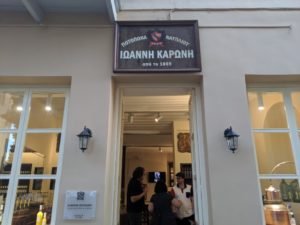 Karonis distillery, where we did our ouzo tasting 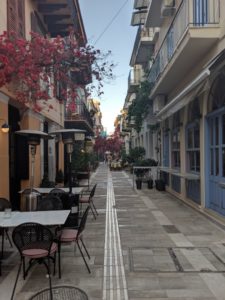