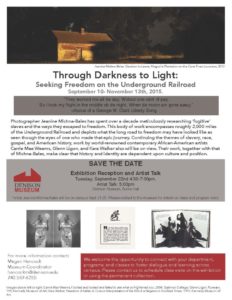 In the early to mid nineteenth century, thousands of slaves took cover under darkness and began their escape from their slave masters via the Underground Railroad. Although a remarkable piece of American history, the clandestine nature of the network leaves a visual gap in the way the system is studied. Many artists have attempted fill this void with their own interpretations.

Michna-Bales spent over a decade documenting around 2000 miles of the Underground Railroad with her photography.  revealing what the journey must have looked like to those who embarked on it. Through a meticulous study of primary documents and newspapers, she draws the Underground Railroad into the world of visual representation, offering a new look at the journey of the the slaves pursuing freedom. In doing so, she brings the Railroad to modern eyes without compromising feeling of secrecy along the trail.

The exhibition also contextualizes Michna-Bales’ photography with works by Carrie Mae Weems (photograph “I Looked and Looked and Failed to See What So Terrified You”), Glenn Ligon (the Runaways series), and Kara Walker (hand-cut pop-up book Freedom, a Fable: A Curious Interpretation of the Wit of a Negress in Troubled Times).

Weems is a contemporary artist recognized with a Lifetime Achievement Award from the Congressional Black Caucus Foundation in 2013 and the WEB DuBois Medal from Harvard University among other distinctions. Her work spans across several mediums but is primarily based in photography and video. Her artwork is rooted in African-American identity and its effect on other facts of one’s sense of self.

Ligon grew up in the Bronx, New York in the 1960s and 70s. His achievements include the Joyce Alexander Wein Artist Prize from the Studio Museum in Harlem which he was awarded in 2009 and the Joan Mitchell Foundation Grant in 1998.

All four artists use history to explain the present and vise versa. Their works enrich the narrative told by Through the Darkness by blending themes of gospel, American history, culture, and their continuing effects on identity. Through this melding of ideas they send a powerful message about slavery, freedom, and Black identity.