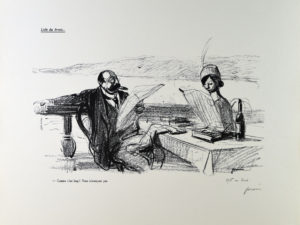 On June 28th, 1914, Austrian Archduke Franz Ferdinand and his wife, Sophie, were assassinated by a Serbian extremist, throwing Europe into chaos that devolved to war a month afterward. Within a week of the first declaration of war between Serbia and the Austro-Hungarian Empire on July 28th, all of Europe’s strongest powers had joined, launching the continent into mass-scale war and beginning World War I.

Jean-Louis Forain worked as a graphic correspondent for Le Figaro, a widely distributed Parisian magazine, throughout the course of the war. He travelled along the fronts, seeing the trenches and the lives of the soldiers as well as the war’s destruction and impact on civilians with his own eyes, illustrating prints for the magazine that reflected what he saw. With a selection of Forain’s prints on display, this exhibition looks through Forain’s eyes as he experienced the war, showing both the political turmoil as well as the everyday hardships of the soldier and the civilian.

This exhibition is on display from February 1st, 2017, to May 12th, 2017. All 135 prints from Forain’s war portfolio in the Museum’s collection along with translations of their captions can be found here.

Link to images and translations