Today was our first full day in Athens to kick off our Art and Archeology seminar. After getting grounded in Chicago and missing our original flight to Athens, when we arrived yesterday everyone was exhausted. After a good night’s sleep, we were all excited to get out there, learn, and see some cool places.

We started off the day with breakfast on the hotel rooftop with a view of the Acropolis, one of our main destinations of the day. The breakfast was similar to continental breakfasts that you might find at a hotel in the United States; there was a spread of eggs, meats, toast, yogurt, and fruit as well as juices and coffee available. The weather was very pleasant, mild and mostly cloudy. 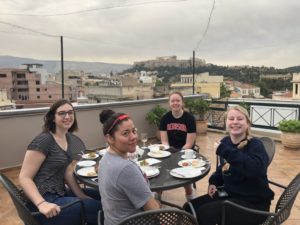 Hannah, Mireya, Annie and Kenzie eat breakfast on the roof at the hotel. The Acropolis can be seen in the background!

After breakfast, we met as a class in the hotel lobby and walked to the Acropolis site, which took about 20 minutes. There we were able to see the archeological sites and ruins of some of the most influential sites in Classical ancient Greek history. Many of these sites were sanctuaries dedicated to the gods and were meant to be a place of refuge for citizens of Athens. The Theatre, built in the sixth century BC dedicated to Dionysus and built at the foot of the southern slope of the Acropolis, is thought of as the birthplace of theatre. There is a stage front and center, with semicircle rows of seats expanding outward from that to house up to 17,000 spectators. It was home to theatre festivals and many performances as theatre was an important part of ancient Greek culture, which we learned set the stage (yes, pun intended) for the modern notion that any functional and sophisticated city has a good theatre community. It was interesting to imagine what it may have been like to sit at that theatre for many hours in the hot sun; nothing like our modern-day experience even though that was where theatre performances originated. 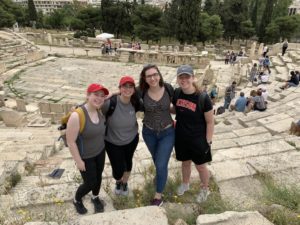 Kenzie, Kellsey, Hannah and Annie stand in front of the theater.

Up the south slope from the theatre, we passed through the Propylaia, the entrance to the rest of the Acropolis that was commissioned by Athenian leader Pericles following the Persian wars. It was built with marble and limestone and has a six-column Doric façade at both the entrance and exit (East and West sides). It served to control who accessed the site, as not everyone was allowed equal access to the sanctuary and protection of the gods. It was certainly big and impressive, with high ceilings and beautiful columns and marble. After entering through the Propylaia, the first and largest site we stopped at was the Parthenon. It was a temple dedicated to the goddess Athena, the patron of the Athenian people. This large structure was under construction from 447 to 438 BC and was meant to replace an original that was destroyed in the Persian wars and be an offering of thanks to the god for their victory over the Persians. Lastly, on the North side of the Acropolis we stopped to see the Erechtreum, a temple dedicated to Athena and Posiedan. 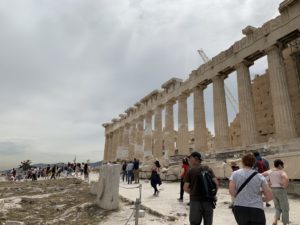 The Parthenon at the Acropolis.

After exploring the sites at the Acropolis, we headed to Pnyx Hill and the Philopappos Monument. Pynx Hill was a gathering space from ancient Athenians to hold assemblies, forums, debates, and elections of sorts, making it one of the most important sites for the birth of democracy. There was a small stage at the top of a slope where speakers and leaders would speak to and reside over large crowds of citizens. Nearby, we saw the Philopappos Monument, dedicated to Philopappou himself who was a prince and leader. It was interesting to see this dedication to him, as he wasn’t born Athenian, yet clearly influenced their society at the time. We learned that this is a representation of the interaction between, and slight blurring of, Greek and Roman culture.

Following a long tiring morning of walking around, climbing hills, and avoiding slipping on many marble walkways, we were all ready for a break and some fuel. The group broke for a lunch break in Plaka before our next activity. Our group ate at a small restaurant off the walkways close to the Agora that had sandwiches and refreshing smoothies. 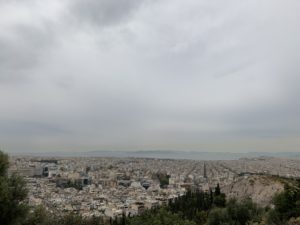 The view of Athens from the top of the hill at Philopappos Monument.

After lunch, the class as a whole went to explore the Agora, which is located northwest of the Acropolis. It was a major site of craftsmanship, business and government in the height of ancient Athens. We saw a number of stoas, or buildings that are essentially large, shaded porches, where the government officials would meet, and Athenians would seek refuge from the sun. As we walked up the hill, we were able to see the Temple of Hephaestus, a place where Athenians could worship the god of craftsmen, artisans and sculptors. It makes sense that the temple would be located within the Agora, as many of the craftsmen created and sold their work inside its boundaries. We finished the tour with a look around the museum collection at the Agora of Athens, which has a potty-training receptacle on display. It was really fun to see a museum full of such average, and somewhat modern looking, items. After the museum we were tasked with sketching some object at the Agora, and then we were free to go. 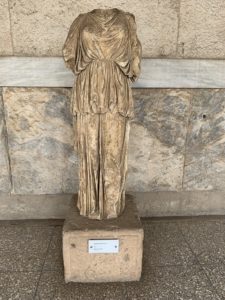 We went to Coffee Island, officially our favorite coffee-to-go spot, with some friends from the trip. We got some coffeeccinos, which, to our knowledge, are blended espresso frappuccinos. We sat in the square and did some people watching and looked at all the graffiti, both beautiful and vulgar, on the walls. 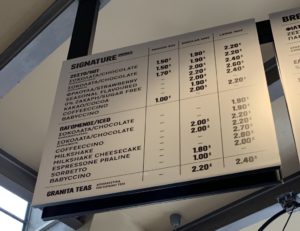 An image of the menu at Coffee Island.

Once we took a quick shower and nap break at the hotel, we were ready to continue on with our afternoon free-time. A group of us decided that we wanted to do a nicer dinner tonight, so we headed back up towards the Acropolis. We choose a restaurant mostly at random and took a seat. We practiced a bit of our practical Greek language skills when ordering, and the waitress really seemed to enjoy that! We all had a spread of various kinds of food and enjoyed a lot of good conversation. When the meal finished, we were served a lemony alcoholic drink. The waitress introduced it as mastika, or mastic liqueur, which is a sap-like substance that is harvested from trees within the pine family.

We took the time to then explore areas of the city we hadn’t yet. We set off to look for nightlife and bars, which we had been told could be a potentially fun experience. Instead, we ended up wandering into residential areas, and stumbling into eateries that seemed very “locals only.” It was really exciting seeing this side of Athens because we had really only seen commercial and touristy Athens up until this point. The residential areas were much quieter, and I was able to get a better take on what it would actually be like to live within a city like this one.