By Shelby Tour and Ryan Klemptner

Today, we began by taking a bus to Eleusis and visiting both the Eleusis site and museum. Since Greece had an election today, the bus ride was much shorter than anticipated to the site, lasting only about 25-30 minutes rather than an hour. Upon arrival, we waited for a short period of time before being let into the site.

Once in the site, we met a group of students from the University of Arkansas led by a friend of Dr. Kennedy. With this group, we did a quick reading activity near a replica of the Arch of Hadrian. Dr. Kennedy then gave some brief history on the cult activity that took place at the Eleusis site, and how it was a cult exclusively for Athenians until the 5th century. A student in our group then presented some background on the site. This included information on how deities like Demeter, Persephone, and Hades were intertwined with the site. We also learned that the cult ended when Christian beliefs and ideology were brought to the site. The Eleusis site is important because the ritual that took place there offered those who partook eternal life. This is possibly a threat to Christianity, and why the tradition died out once Christianity was imposed on the site. 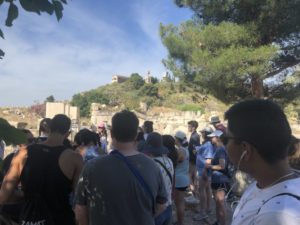 Denison and the University of Arkansas students deciphering the Arch of Hadrian.

We then learned about the Lesser Propylaia, which was built by the Romans and was the original entrance to the Temple of Demeter. The Lesser Propylaia was also a place where someone looking to study Philosophy would have come. A student also presented on the Greater Propylaia. These sites were extremely interesting because it was located right next to a cave, where it was believed there was an entrance to the Underworld. There is a story that Hades came out of the Underworld from this cave and snatched up Persephone, the daughter of Demeter, and took her down to the Underworld with him. A final site presentation was given on the Telesterion, which was another site dedicated to Demeter and Persephone. 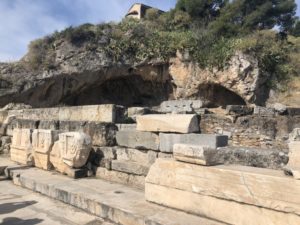 Cave thought to be the entrance to the Underworld, located next to the Greater Propylaia. 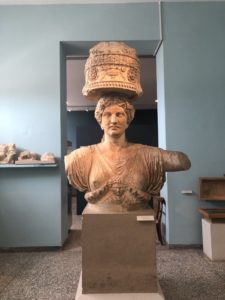 Caryatid head, once thought to be the head of Demeter.

After the site presentations, we waited for about 20 minutes before entering the museum, also located at the site. We were lucky enough to wait on a beautiful patio with a gorgeous view overlooking the water, with some ships as well as a view of the town of Eleusis. The trip in the museum was interesting and useful, as we were able to make connections to things we have learned in the class as well as see some interesting statues of things previously located at the site. An example of this was the Caryatid head, which all of us got to see in the museum. Before entering the museum, we learned that an Englishman wanted the head, and the Greeks did not want to give it up. Both groups thought the head was of Demeter. The Englishman stole it, and the Greeks predicted that the ship would sink. The ship actually did sink, and the head was retrieved. It was amazing to see it represented in the museum! 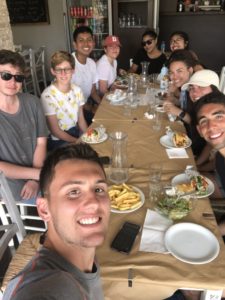 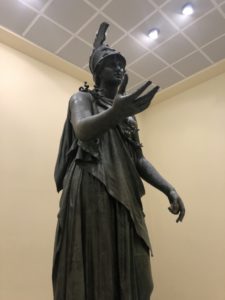 After finishing our visit to the site at Eleusis, our group headed into town to grab lunch. We quickly realized that 12 pm was way too early for the locals to eat lunch, and the only thing in sight was coffee. Alas, we finally stumbled upon a spot that was serving more than just espresso freddo, and we all filled our stomachs with delicious gyros, souvlaki, and chips. After finishing our meal and paying the bill in all coins, we headed back to the bus. The next stop was the Piraeus Archaeological Museum, where we started out as a group and headed straight for the bronze statues. The statues in the museum were some of the best preserved, and depicted the goddesses Athena and Artemis in great detail. We talked about the relationship between Athens and Piraeus, which served as the port where non-Athenians would arrive. The museum housed evidence of these non-Greeks and non-Athenian citizens, including a large cult statue of the “Mother of the Gods.”

Next, we ventured into a vase room, where we found vases used for everything from storage, transport, and burials. The room also housed early medical instruments, which Professor Kennedy pointed out have not changed much even in modern times. We also looked at cosmetics containers, utensils, and an ornately carved bronze “compact” mirror. The next stop in the museum was the tombstone room, where we saw a variety of different headstones. Professor Kennedy showed us her favorite one; a bilingual tombstone that featured both Phoenician and Greek for a woman who had lived in the ancient city of Byzantium. The next tombstone was a drastic change from the previous, as it was massive in size and was clearly a show of the subject’s wealth. 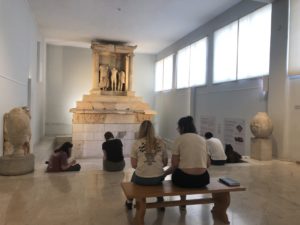 Denison students sketching the tomb of a wealthy Athenian man. 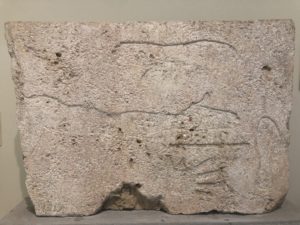 Measurements for limbs used in the ancient ports at Piraeus.

Our group also walked through the “port” section of the museum, where we saw the measurement methods used at the Piraeus port in Ancient Greece, and saw some of the goods that would have been traded. Our final destination in the museum as a group was to see the huge statue of Hadrian, the Roman Emperor, before splitting up to wander the museum and spend time sketching. After 45 minutes to take in the rest of the museum’s offerings, we hopped back on the bus and arrived back at the hotel shortly after.

Once back at the hotel, we had a lesson with Dr. Goldman on the Greek alphabet and learned all the most important phrases (like how to ask for a beer). A few of us then went to dinner in an authentic Greek restaurant recommended by the professors, and stopped by an outdoor bar on the way back to end the night. 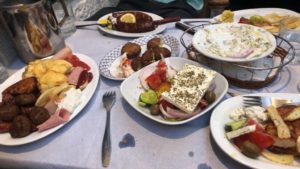 Dinner at an authentic Greek restaurant recommended by Dr. Kennedy and Dr. Goldman.