by Trent Schulten and Mireya Gomez

Our seventh day in Greece began with a 3 hour bus ride from the bustling city of Athens to the chilly and windy mountains. Here in the mountains we visited the ancient city of Delphi which commemorates the God Apollo.  We had 5 minutes to put our bags in the hotel before we were off and exploring the site.

Once at the site we learned of its origins and of the important factors that contributed to its regional importance. Delphi was considered a highly important pan-hellenic sanctuary that tied many greek city-states together through their pythian games, religious significance, treasury, and oracle known as the Pythia. Unfortunately, we had an unwanted guest following us on our expedition, rain. Once we arrived it began to rain and become fairly windy but that did not put a damper on our moods. Soon the sun was out again. We first looked at the reconstructed Stoa of Athens which commemorates the battle of Marathon. This housed many relics for Apollo, which was a way to show off all their wealth.

Then we looked at the Temple and Altar of Apollo which was considered one of the larger temples in ancient Greece.  It had very large columns and followed a 6 by 15 format. Unfortunately like many other temples it was destroyed by fire but as you can see in the photo, we still have an idea of how immense the structure used to be. From there we also glossed over a few other structures such as the Sybil Rock which was considered to be the center of earth and where the oracle proclaimed her prophecies.  Along with the Rock we briefly saw the theatre which was rather steep because it was built into the side of the mountain.

Delphi was truly amazing but the view is what sets this site apart from other ancient cities.

After we spent some time at the mountain everyone went to grab something to eat in the beautiful town of Delphi. Fortunately, many of the restaurants overlooked the beautiful mountain range and the hardest part was deciding which restaurant to eat at. After eating, everyone started walking towards the Delphi Archaeological Museum. Due to the many people visiting, the museum was quite crowded at first. After walking into the museum it was easy to see why everyone was so eager to enter, the collection of art available was truly an amazing sight. Among all the beautifully crafted sculptures and precious dedications a couple of pieces caught everyone’s attention, these pieces being; the remains of the pediments from the Siphnian Treasury, the frieze from the Athenian Treasury and a bronze statue named The Charioteer.

In the museum were the remains of the pediments from the Siphnian Treasury, located along the side of the mountain. The captivating art carved into the pieces depicted the assembly of the Gods as well as the War with the giants. There are however still 2 unconfirmed pictures crafted into the piece. Another piece that had impressed us was the frieze collected from the Athenian treasury also located along the side of the mountain. This specific piece was not only interesting to look at, but the drawings/ carvings themselves depicted many important Greek myths. Among the myths, our group was able to clearly identify the battle between Heracles and Apollo for the tripod. The last piece that we looked at and easily the most enchanting was the bronze statue called The charioteer. Although the full statue was not completely put together we were able to see what archeologists suspected the full piece to look like. Despite not being able to see this magnificent piece fully constructed, the pieces available were still interesting to look at. We saw that the charioteer was a young male athlete wearing a longer tunic. Although one arm from the charioteer is missing, one hand is clearly depicted grabbing onto the reins of a horse. Based on the amount of detail and stance of this statue, as a group, we hypothesized that this specific piece was most likely constructed during the archaic period.

After touring the museum and completing our sketches at the site, it was free time! Everyone went back to the hotel where we received our rooms, each of which had a spectacular view of the mountain ranges that we had been greeted with earlier in the day. After taking their power naps everyone went out on an adventure and spent the rest of their day eating food, finding souvenirs and walking around Delphi, a cute town that allowed for some truly amazing pictures. 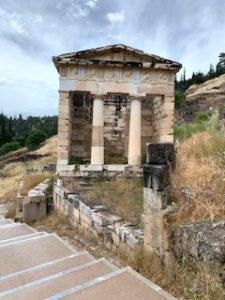 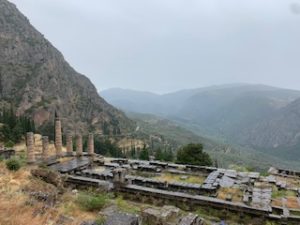 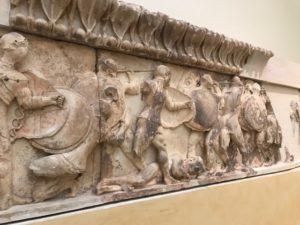 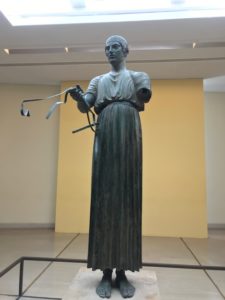