As we embarked on our 8th day in Greece, we began by departing from Delphi and drove four hours toward Olympia. Upon our arrival to Olympia, as a group, we got a light lunch from a nearby slovaki restaurant. Though a short lunch, it revitalized our energies for the upcoming walk. We visited the archeological site of Olympia: an ancient sanctuary, and birthplace of the Olympic Games. During our tour we learned a about the following monuments: Olympic Stadium, Temple of Zeus, Workshop of Phidias, Temple of Hera and Philipeion.

We began our tour with the Olympic Stadium. Historically, the stadium was used for running games. The stadium is most distinguishably know for its capacity to hold about 45,000 guests during the renowned games. Characterized by its rectangular structure, measuring 212 meters in length and 34 meters in width, it provided the ideal setting for athletes to run with a flat group from traction. Prior to entering the stadium, there is a short tunnel which in antiquity was underground sheltered away from the sight of visitors. The tunnel was not only the entrance for athletes into the stadium, but also a private space for them to amp themselves prior to racing. Given, the athletes were not only competing to represent themselves but also representing their cities. The rewards for winning the games included recognition through having a sculpture being built after the winner. Following the stadium, we observed the temple of Zeus. As the name implies, the patron of this temple was Zeus; the god of the sky, thunder and justice. The temple was designed with the Doric order and built with limestone. Unlike the other temples we’ve seen before, the temple of Zeus in Olympia was the only that was destroyed due to a fire or an attack from invaders. Rather, the temple collapsed due to an earthquake. The workshop of Phidias was another distinguishable site within Olympia to which we were able to view firsthand.

The owner of the workshop is a renowned artisan that is known for his many works but most famously for the statue of Athen. This site is speculated to the be the workshop because within this site tools along with storage rooms which would implicate that this was a workshop. Statues became treasuries. Ultimately the workshop was destroyed by a fire.

Following this site, we viewed the Temple of Hera. Notably this temple was designated right next to Zeus’ because these were two gods were married to one another. Interestingly enough, this temple was built with wood materials which over time deteriorated. Lastly, the Philippeion can be recognized for its ionic structure. It was built in 338 BC by Phillip II of Macedonia after Macedonians defeated the Athenians.  The monument was built from limestone and marble which gave it’s unique look. In the museum we had various artifacts from the site that we visited in Olympia.

Some of the main artifacts that we saw in the museum were from heavily eastern influence. As we could see in the images many of the artifacts are dedications to warriors. They found lots of body armor in this site because of the competitions that occured at the site. There were lots of helmets and they were all unique for all different cities that came to Olympia and were at war! Often they had carvings and engraved and sometimes they had names that will say whom they belonged to!The body armor was usually stitched on leather and would be very uncomfortable to wear. The shields were wood and leather and covered in bronze to be made tough enough. In the museum we walked our way through many of the remains that were found on site. One of the most impressive remain that was found was the Nike, which is a victory. Another impressive feature that was well intact was the pediments that were located on the temple of Zeus. The pediments were located in the east and west of the temple and were decorated beautifully as you can see.

For dinner we had a lovely visit to “Klio’s Honey Farm.” Here we were able to learn the ancient process of making honey and the present process. Having a bee farm could be some work but it is handled pretty well! We were able to taste fresh honey from Klio’s bees. It was honestly some of the best honey Ive ever consumed. We the proceeded to eat dinner with a beautiful view! It was homemade and some welcoming! I can speak for everyone that we were quite thrilled to take a break from our usually souvlaki and gyros! After dinner everyone proceeded to go to the honey farm small shop and buy their ointment that is multi purposeful ! 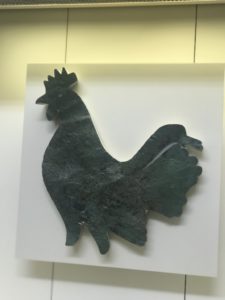 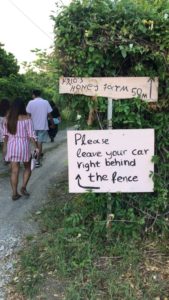 This is the entrance to the Klio’s Honey Farm ! 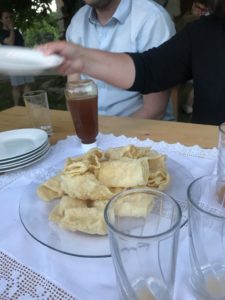 Here is Klio’s honey with a sweet fried dough that is desert! 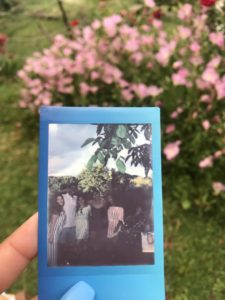 Here is a group of students at Klio’s Honey farm with the beautiful flowers in the background ! 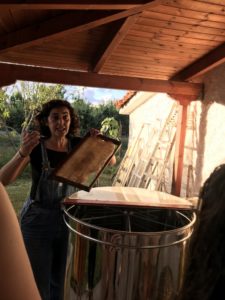 Here is Klio and her machine that she uses to maintain the honeycombs in tact and takes all the honey out!! 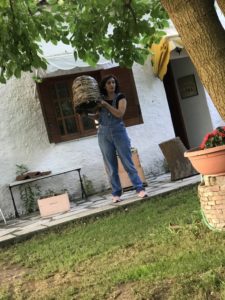 Here is Klio’s with her grandma’s replica of an old bee hive that was used to keep the bees and their honeycombs. 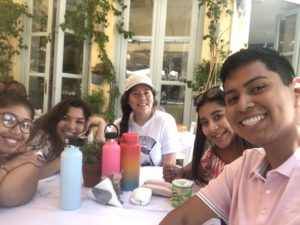 Here is a picture while at lunch! 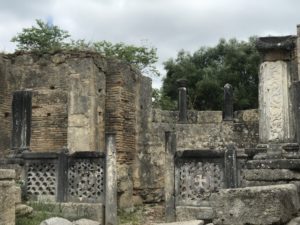 Here is the workshop where many pieces of what is believed to be carving of the flow of the statue for Zeus. 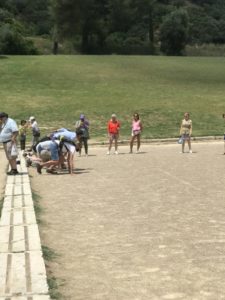 Here is people racing in the stadium! 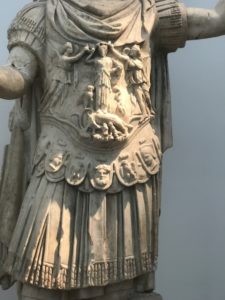 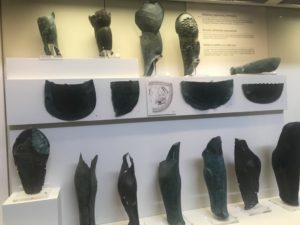 Here you can see the bronze metal shinguards that would be attached to the leather to protect the warriors. 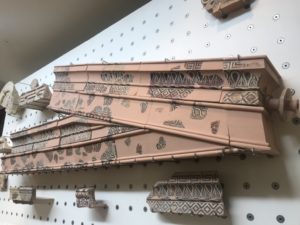 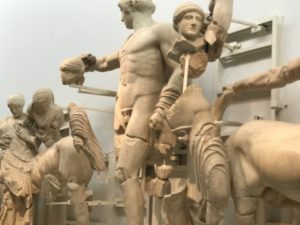 This is part of the pediment fro the temple of Zeus.