Notice: This post was submitted for publication in early June, so while the content is still relevant, many of the statistics given regarding COVID-19 are now out-of-date. For the latest information at the time of publication, see “Updates” at the conclusion of this post.

COVID-19 has claimed hundreds of thousands of lives (as of early June, that number is at a staggering 108,000, in the United States alone and continues to climb), has infected millions globally, and seen the US lose tens of millions of jobs. After months of stay-at-home orders, some states are easing restrictions put in place to prevent the spread of the coronavirus. Now some states are seeing new rises in infections. The impact of the virus is being felt by every person to varying degrees all around the world.

Some Denison students who had worked hard and dreamt of studying abroad during spring semester of their junior year were met with disappointment when they received word they would have to leave their host cities around the world to come home immediately. As disappointing as it was, the four students featured here (who studied in Tanzania, Italy, Australia, and Jordan) each sincerely recognized how fortunate and lucky they were to get back home and stay healthy given the severity of the pandemic and how much tragedy it has inflicted.

In an alternate world, Rowan Sharkey ‘21, an Environmental Studies and Data Analytics major from Granville, OH, would have been alone in the Jonzi Rainforest in Tanzania doing independent research during the finals weeks of the spring semester. 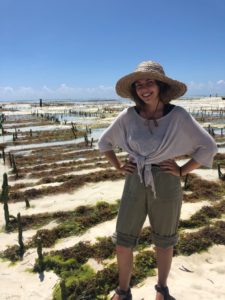 Sharkey, like many other Denison students, was met with immediate disappointment when her program was cancelled and students had to return home in March. Because Africa was hit by the virus slightly later than other countries, she remained in Tanzania for another week after getting the news.

“I was really lucky to be where I was.”

She studied with nine other students (all from the US) with SIT’s Coastal Ecology and Natural Resource Management program and lived with two host families during her time in Tanzania. Her courses were all field-work and did not involve lectures in classrooms. Before the news of cancellation, the group had been island hopping off of the coast of Tanzania and learning about agricultural practices, climate change, and Swahili.

Just one week before Sharkey would ultimately return home on March 20, her program received an email that their program was suspended.

“I had heard about other programs getting shut down, but I wasn’t too worried because Africa hadn’t been hit as bad [in March]. We were in a bubble there, so I was thinking, ‘What is all the hype about? Why is everyone freaking out over this thing?’ Then I called my mom when I figured out my program was cancelled and heard about the effects of the virus in the US. It felt really surreal hearing about it but not living it.” Sharkey describes not wanting to go back to the US because things seemed so much worse in the US than in Tanzania.

Her host family was relieved that she was going and wouldn’t be in the home, for both her safety and their own. “Foreigners have a correlation of the virus with us. I would be walking down the street and people would cough at me or call me Corona.” Tanzania has now been hit by COVID-19 with 509 cases as of June 2.

“Even though it was cut short I feel very satisfied with the experience I got there. I’m sad I couldn’t stay the whole time, but I definitely got more out of it than I was expecting to and I am so happy that I went.”

Kathryn Boyd ‘21, a Studio Art major from Alabaster, Alabama was at the Berlin Wall on a Spring Break trip with her program at the very beginning of March when she and other students received the email they were being sent back to the US from their Rome, Italy based program. Only 24 hours prior, Boyd had first tried currywurst and visited the Berlin Television Tower. 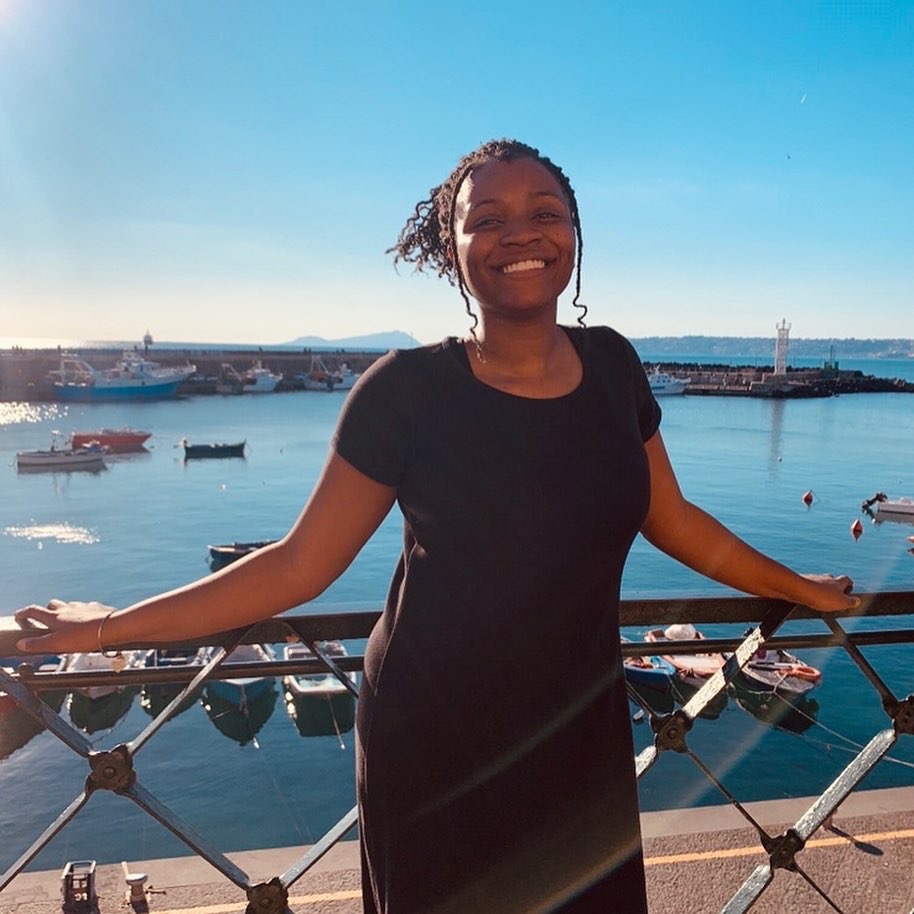 Image 1 of 2
“I just thought, ‘This can’t be real, this can’t be happening.’ We didn’t think, if anything, we would be sent back before late March.” Italy was one of the first and most severely hit European countries in by COVID-19 and has been under the longest countrywide lockdown. As of June 2, almost 33,530 have died and 234,000 have been confirmed ill.

Boyd had never left the country prior to studying abroad. “The whole experience itself made me realize I want to travel more. Hopefully I can in the future. I was able to meet a whole bunch of new people. I had never thought I would be leaving the country in the first place to study and travel, and to experience a culture so different from mine, so I feel really grateful.”

Her program was with Temple University. As a Studio Art major, Boyd had the opportunity to see and learn about art from a unique perspective in Rome. Down the hall from the single dorm room Boyd lived in, was Maya Carolina ‘21, another Studio Art major from Denison and Boyd’s roommate at Denison. Boyd and Carolina are just some of the students who had to complete classes remotely.

“I tried to make the most of the time I had there. I encourage other people to go abroad. If you have the chance to, please go. It’s completely different and is just a whole new incredible experience to have.”

Stella Gewirz ‘21, from Washington D.C. studied in Melbourne, Australia through direct enrollment at La Trobe University. She left for Australia on February 12. Six weeks later, on March 23, she was back on a plane headed back to Washington D.C. where she spent the next few weeks in total isolation before transitioning to quarantining with her family. 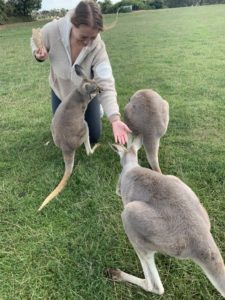 The first two weeks of her time in Melbourne were spent on orientation with the university. Gewirz went with a group down the Great Ocean Road for three of those days. “It was jaw-dropping views the entire time; we saw kangaroos, koalas, went surfing, and visited really small beach towns. I had never seen anything like it.” During this time, she met other students from different universities around the US and around the world.

After orientation, she traveled to Sydney and visited Bondi Beach, a place she had always dreamed of visiting. She spent the next two weeks in classes before a student at La Trobe University tested positive for COVID-19. Upon the news, classes immediately went remote.

On March 23, she was back home in D.C. adjusting to taking classes online with a 14-hour time difference. “I have classes from 8-10pm on Sunday nights now. It’s crazy.” Gewirz is enrolled in four classes: Greek poetry, art, and two courses about Australian history.

“These were classes I definitely wanted to take while I was in Australia. They’re fantastic classes, but it’s weird to not be there taking them, because I’m learning about Australia while not there.”

Although she understandably feels cheated out of part of her abroad experience, she strongly recognizes how much worse the situation could be and is thankful for the time she had there.

“I want to go back to so badly after this,” It was Gewirz’s first time in that part of the world and she vows to go back one day after the current pandemic ends. She is currently quarantining in Clark County with her extended family. 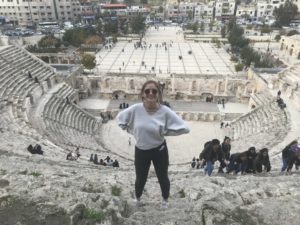 Though she was only in the country for a month and a half (February 1 to March 16), she felt she knew the city well by the time of her departure. “I got the email from the embassy that the airports were going to potentially shut down in two days while I was at the gym.” Within 24 hours, Tierney was on a flight back to Wellesley, MA where her family is. “It was hard to leave. I didn’t get to say goodbye to everyone on my program.”

On her last morning in Amman, Tierney describes the city seeming as though everything was somewhat normal. “Nobody had changed what they were doing because of COVID-19, the only thing that had changed were the Shisha (Hookah) cafes were closed. Everyone was out walking with their families and the streets were crowded. It seemed so normal, even though we knew it wasn’t normal. We spent the day walking around eating food and getting presents for my host families and family back at home.”

The country of Jordan hosts vulnerable refugee populations. In 2019, 744,795 refugees were registered in Jordan: approximately 655,000 Syrians, 67,000 Iraqis, 15,000 Yemenis, 6,000 Sudanis, and 2,500 refugees from a total of 52 other nationalities according to The United Nations Refugee Agency. “They knew if COVID-19 spread rapidly in the country, they wouldn’t be able to support it. Though, they do have a really strong healthcare system. King Abdullah II said initially that once they had 20 reported cases the country would shut down and that’s exactly what happened.”

Tierney hopes to one day work in public health. Three of her five family members battle Type I diabetes, and Tierney has seen firsthand how inaccessible the US healthcare system can be. This has prompted her passion. “Luckily because we do have resources, we can provide for it. If we didn’t have those ‘luxuries’ it would be messy. There are so many health inequalities in the US that made me want to get into it. The more I’ve been learning about it, the more issues I’ve learned about it.”

Her program involved many lectures with experts in the public health field. Some worked firsthand in refugee camps and gave talks about possible solutions to public health needs. “We heard a woman who worked with the UN talk about family planning resources in Jordan that’s changed so many women’s lives.” While Tierney wants to study public health broadly for now, she is interested in health education and family planning.

During her stay in Jordan, she became close with her host family. The family included two young girls, three and five years old, with the mother expecting another child. Tierney learned about the education system in Jordan with the children and about the healthcare system through her host mom’s pregnancy.

“I had taken Arabic at Denison for a semester before I left for Jordan. It was something I wanted to continue studying.” Her Arabic professor, Dr. Hanada Al-Masri, at Denison helped Tierney seal her decision to study in Jordan.

The program consisted of 30 students and all but one were from the US. Since returning home, Tierney, like many students, has had to adjust to learning remotely. Lectures are all online but adjusting to time zones has been a challenge.

Like Sharkey, Boyd, and Gewirz, Tierney is motivated to return to Jordan in the future.

2020 has seen unprecedented times in the US. When most Denison students made the decision to take on the challenge of moving to another country for the spring semester, they counted on being pushed outside of their comfort zones. However, these same students could not have predicted the chaos that a global pandemic would unleash upon their off-campus experience. Within the span of a month, all Denison students abroad returned home safely from their programs.